Doing the Work of EDI Means Exercising Your Agency

The 1930s United States, particularly the Jim Crow South, was filled with racism and overt segregation. Stereotypes and hate-filled messages were everywhere, including the major channels used to influence cultural thinking, like Hollywood. The blockbuster movie, Birth of a Nation, outrightly claimed “a good lynching.” Others followed, with messages that shaped the discourse and psyche of mainstream America into believing that Black people were rightfully relegated to servant or beast modes. Amidst all the hate, there were amazing trailblazers, like Duke Ellington and his band touring across the hate-filled cities, and glimmers of Hollywood breakthrough–like the Imitation of Life, taking head on the complicated and un-discussable topic of race. Amidst these courageous and talented forerunners was Frederika “Fredi” Washington. “Lithe and light-skinned, she was pale enough to ‘pass’ as white in the color-obsessed South…but she refused to use it for economic or social gain.”

Fredi Washington is a fantastic example of a person who used her power and privilege–in that context, being light enough to “pass” for white–to exert agency. She could have, like other Hollywood actors then and now, kept quiet, let others assume she was white, and accepted the associated benefits. Instead, anchored to a firm cultural self-awareness and deeply held values, she made choices that didn’t always benefit her in the short-term, or economically. She understood herself to be part of a bigger picture, where her exertion of her privilege could harm others, particularly other Black or Brown actors. Conversely, standing firm in her values allowed for a powerful challenge to a broken system, and a challenge that continues to benefit those who have come behind her. Fredi Washington helped to lay the foundation upon which so many of us stand, whether or not we are actors.

Take a moment to give gratitude to all of those who came before us and upon whose shoulders we stand.

There is so much talk in the world about holding people accountable, and finger-pointing on who is to blame. I think we neglect the appropriate level of focus on what each of us can do. Yes, there are systemic changes that need to be made–absolutely. But those changes won’t be operationalized without each of us–every one of us–seeing ourselves as integrally connected to the process. We, through our daily choices and actions, have the ability to breathe life into our desired reality. We do this by exercising our agency, like Fredi Washington.

Agency is acting on our power, privilege and/or responsibility.

Your Power. Your Responsibility.

Personal power and responsibility are individually motivated awareness and commitment to act. Though there are many ways in which power is exerted and experienced at systems levels, the opportunity to make an impact at a personal level cannot be understated nor deferred. Simple and powerful actions can make a huge difference, including modeling inclusive language and displaying empathy for others. Some degree of power is possessed by every person within the workplace, regardless of role. Your values typically determine how you use the power you possess. How you use your power is a reflection of your values-in-action–that you are willing to show up as the person you want to be. This level of personal commitment across an organization–freed from scarcity mentality and the limitations of bias– amplifies the total power available and creates a foundation for more power sharing. 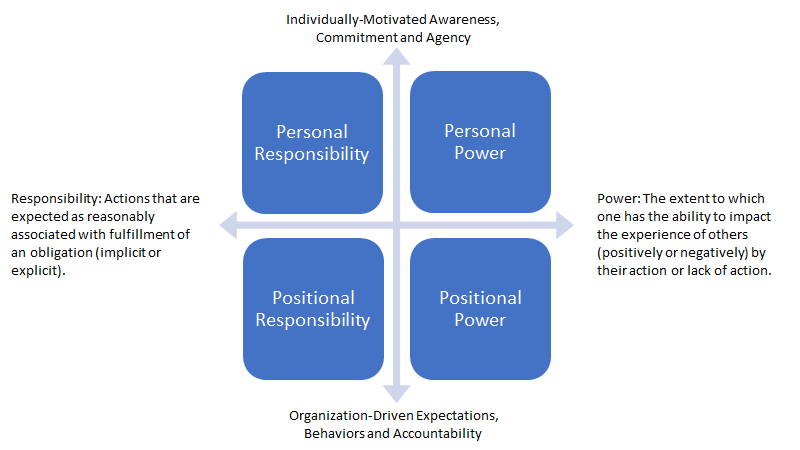 Your passion for a more equitable world is not enough. Passion is internal; it’s the fire in our bellies. It makes us furious when we witness injustice. But what do we do? Shout at our phone when yet another video of a horrendous act shows up in our feed? Or endlessly complain and speculate at dinner with friends about people with “those” beliefs destroying any semblance of inclusive progress we think should be made? Your passion is not your agency–agency requires you to do something. Tweeting nasty tweets doesn’t count. Avoiding talking with colleagues who have different experiences or beliefs from you doesn’t count. Agency requires you to step forward, fully engaging your personal power, privilege and responsibility, and taking courageous action. 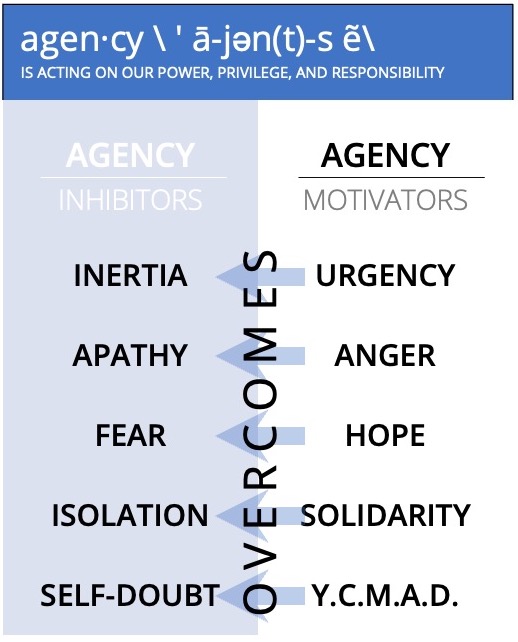 Your courageous action is just turning the energy you likely already possess toward more actionable outcomes. Shifting from inhibiting forces, like inertia, apathy, fear, isolation and self-doubt toward motivating forces, like urgency, anger, hope, solidarity, and belief that you can make a difference (YCMAD).

Urgency: A sense of urgency is the fundamental ingredient for catalyzing change. Urgency means not justifying or rationalizing away a problematic situation with sentiments like “it’s always been like this”, “nothing will ever change”, or “When things slow down a bit I will…”. Acting on urgency is often difficult because we frame the situation we want to change as insurmountable. A more effective starting point is to take a more strategic approach that includes a clear understanding of the desired outcome, followed by identification of significant milestones, then those milestones are broken down into even smaller action steps. The action steps should be small and concrete enough to begin immediate implementation.

Anger: Anger fuels energy, which is needed to overcome apathy. Getting angry means that you care so much that no action is not an option, which is good. Anger is a natural and powerful emotion, but it can also cloud judgment. It’s difficult to be creative, problem-solving, and forgiving from a place of anger. Harness anger to get you motivated, but temper it with the use of analytical frameworks and skills like dialogue and participatory decision-making to help you find constructive solutions.

Hope: We live in a world of fear-filled messages. Even those that appear to promote beauty and luxurious living really just force us to compare ourselves to a false reality and advance the scarcity mentality associated with wanting more of something that is so exclusive that it’s unachievable for us, the unlucky majority. Hope, on the other hand, is more than a pretty picture of what a chosen few have; it requires a path to attainment. Hope is not me fitting into another’s ideal picture but me co-creating, with others who are committed to the goals, an ideal future picture that resonates deeply and that I know how to pursue in action.

Solidarity: Solidarity is about leveraging power–positional power, personal power, and the power of allies. You cannot stand quietly in solidarity. Solidarity requires speaking up, speaking out, publicly, and aligned with your values. The goal of solidarity is to remove the presence of isolation, for yourself others are in solidarity with you, and for others as you stand with them. Isolated people are easy targets, left alone to bare the brunt of criticism, discrimination, and other hurts. Being in solidarity means that sometimes you will not be popular or understood or agreed with, but you will always be on the right side of your own conscience.

You Can Make a Difference: No, Fredi Washington didn’t change Hollywood alone, and yes, all these years later there is still so much to do. What Fredi Washington did, though, was make a personal choice. She, like Duke Ellington, Ruth Bader Ginsberg, Malala Yousafzai, X González and so many others who have faced limitations with exertion of their positional power, found ways to expand impact through leveraging personal power, a deep sense of responsibility, and commitment to courageous action.

Reflect, but not too long. This post is about action.

Learn more about our EDI in Action Series that can help you grow your organization's EDI efforts, extend the EDI conversation more broadly within your organization and establish a base of EDI knowledge and shared language across all of your employee groups.

Why I Hate Anonymous Feedback: 5 Issues with Soliciting Feedback
9 Tips for Being Irreplaceable at Work (Part 2 of 2)
Unique, Multi-Dimensional, Irreplaceable You (Part 1 of 2)
EDI vs. DEI: 4 Reasons to Lead with Equity
11 Ways To Manage the Volume of Work Communications